Studies conducted over the years have found a connection between workers who must stand for long periods of time and a host of health problems, including lower back pain, leg pain, and other discomforts. In addition, what we could call "emotional pain," has also been detected.

Emotional pain would include mental fatigue, lower worker morale, and workers feeling negative about themselves, their work, and their employers. These can all cause a variety of problems, starting with reduced worker productivity. 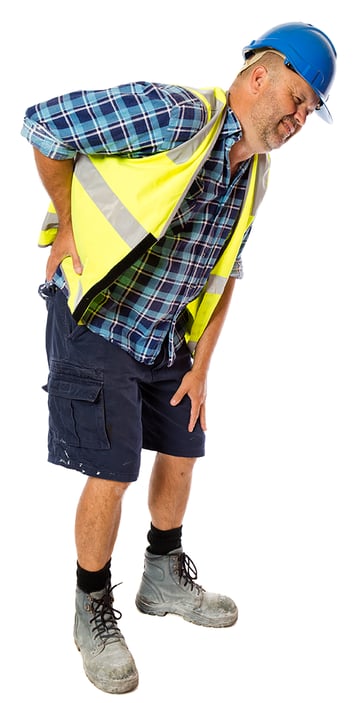 However, a study released in July 2014, was designed to reassess some of these earlier studies as well as look more specifically at some of the health consequences of prolonged standing at work. Some of the specifics of their study we will discuss below. However, ultimately, the researchers concluded the following:

"Based on our review of the literature, there seems to be ample evidence showing that prolonged standing at work leads to adverse health outcomes. Review of the literature also supports the conclusion that certain interventions are effective in reducing the hazards associated with prolonged standing. Suggested interventions include the use of floor mats, sit-stand workstations/chairs, shoes, shoe inserts, and hosiery or stockings." 1

As to those specific ailments associated with prolonged standing, the researchers reported the following:

LBP. Low Back Pain was by far the most common problem. The report found that in some studies, as many as 40 percent of participants in those studies developed LBP. Along with the pain and fatigue, some of these workers also developed joint stiffness and posture issues, including stooping. As to the emotional component, many workers reported they were "hampered by standing" at their jobs.

Cardiovascular Problems. Earlier clinical tests have indicated that prolonged standing along with the age of the participants were associated with increased risk of venous pathologies. Venous pathologies refer to disorders in the veins. The veins fail to function correctly, resulting in varicose veins, phlebitis, blood clots, changes in the color of skin, and also create a more severe disorder, leg ulcers. The researchers agreed with these earlier findings and concluded that prolonged standing does play a significant and potentially dangerous role in the development of vascular problems for workers. "Whether these exposures lead to long-term chronic leg problems is not clear, but acute health effects clearly should be prevented to the extent feasible."

Pregnancy Issues. While several studies have been conducted over the years regarding potential pregnancy issues resulting from prolonged standing, they do not seem to have received the same attention as the other health issues just addressed. Why, we do not know. However, the researchers noted that in the past 30 years, there have been several studies reporting a correlation between prolonged standing at work and a moderate increase in preterm deliveries and reduced birth weight. The researchers confirmed this and also reported that prolonged standing could result in increased incidences of stillbirths as well as spontaneous abortions.

"It is interesting to note that the first effective intervention method the researchers reported above was the use of floor mats," says Kristin Fisher, Marketing Manager for Crown Matting Technologies. "They were referring to antifatigue mats, which many studies have also concluded are the best way to reduce standing fatigue and prevent many of the health issues."

For more information on antifatigue floor mats and how they can protect health and improve worker productivity, contact a Crown Matting Representative.