The History of Mats

Mat  \ˈmat\: a piece of coarse, woven, plaited, or felted fabric used especially as a floor covering or support (Merriam-webster). 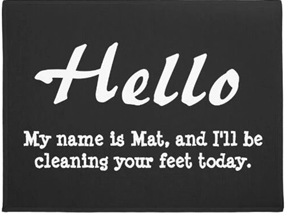 Archaeologists believe that the earliest portable floor coverings were made as far back as 25,000 years ago!

The dwellings of clans used tree bark to create a type of felt which was then made into floor mats. After all, even primitive people don't like hunters tracking in dirt and mastodon guts all over the place.

Tree bark felt mats soon became the old way as early humans evolved and found new ways to improve their internal living environment. With this evolvement, humans developed the practice of weaving and used it to make clothing, baskets, and other items like matting. Weaved straw or plantlike grasses called rushes, were the first form of mat found in Mesopotamia about 6,000 years ago.

In biblical times, weaved mats were used by people with little money as sleeping pads to create a little bit of warmth from the cold earth floors of their homes. Mats of this sort were probably made of woolen yarn, which was a popular floor covering well into the Middle Ages.

In the 9th Century, Japan used Tatami mats, tatami was made of straw formed from both rice and soft rush. Tatami mats were used for aristocrats and did not become available to commoners until the 17th Century.

In the early 1800s, a new form of matting was found in England, it was created by using waste products from traditional weaving looms, called thrums, that was then pulled through a woven base of straw or another sturdy material. This process was known as rug hooking.

Imagine not having the mats you have in your doorway today. It could be raining, or snowing, or it has been so dry everything is dirt and dust outside. Your average building with as little as 150 people entering and exiting can produce over a pound of dirt tracked in every week, a three-stage matting system can reduce this by 85-95%!

Check out the Real Dirt infographic for the truth on how matting solutions keep our facilities clean and safe.

For more information on our matting solutions, contact your Crown Matting Technologies representative.